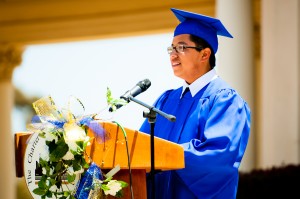 The journey to create The Charter School of San Diego began in 1993, when charter law was implemented in California. After a year of planning, charter revisions, and collaboration with San Diego Unified School District staff and members of the community, the SDUSD Board of Education unanimously approved The Charter School of San Diego’s petition and charter as the first approved charter school in San Diego.

CSSD opened for student enrollment in 1994. It was established as a visionary model for educational reform. Specifically aimed at students whose futures are at risk because conventional schooling has failed them, CSSD provides a unique educational environment for students whose academic and social needs are not met by traditional approaches.

The 2014-2015 school year marks CSSD’s 20th year of serving the San Diego County community. During this time, CSSD has demonstrated success, operationally and instructionally, while serving the population charter law was intended to serve.

Expand the selections below to learn more about the awards and accomplishments of The Charter School of San Diego.

CSSD graduates regularly move onto a variety of highly respected post-secondary institutions. Please review the list below to see our latest College Acceptances!

United States Commerce Secretary Penny Pritzker has announced that The Charter School of San Diego is one of four recipients of the 2015 Malcolm Baldrige National Quality Award, the nation’s highest Presidential honor for performance excellence through innovation, improvement and visionary leadership. This is the first time that the award has been presented to a school – most importantly, a charter school – in its 28-year history. The award ceremony will take place on April 3, 2016, at the annual Quest for Excellence Conference.

This honor is a tribute to excellence across many sectors. It is awarded to organizations that demonstrate quality and performance excellence. Organizations are judged on their Leadership/ Governance, Strategic Planning, Customer Focus, Knowledge Management, Workforce Focus, Operations, and Results.

President Ronald Reagan established the Malcolm Baldrige criteria and its subsequent National Quality Award. This highly-coveted award is administered by the Baldrige Performance Excellence Program, which is based at and managed by the National Institute of Standards and Technology, an agency of the U.S. Department of Commerce. It was designed to support American business in being globally competitive.

The California Council for Excellence (CCE) today named five organizations as the 2015 recipients of the California Awards for Performance Excellence (CAPE) Eureka Award. The honorees are recognized for their outstanding committment to sustainable excellence through innovation, continuous improvement, and visionary leadership. This year’s recipients represent three sectors: Education (represented by CSSD), Small Business, and Health Care.

Overseen by CCE, the CAPE program manages the awards process which adheres to the Baldrige Excellence Framework. The Eureka applicants were evaluated by teams comprised of the 2015 CAPE Board of Examiners. The rigorous evaluation process takes more than three months, including a weeklong site visit, and covers the applicants’ performance in seven areas defined by the Baldrige Framework: leadership; strategy; customers; measurement, analysis and knowledge management; workforce; operations; and results. The Eureka application evaluation is overseen by the CAPE Board of Judges to ensure the integrity of the process and to recommend recognition levels to CCE’s Board of Directors for ratification. The CAPE Eureka Award process is modeled after that of the Malcolm Baldrige National Quality Award.

The 2015 Eureka Awards will be presented at a March 2016 ceremony during the CCE Best Practices and Awards Conference in San Diego, Calif. This one-day event features presentations from CAPE and Baldrige award recipients in which they share lessons learned and best practices identified through their journey to excellence.

In 2005, 2007, and most recently in 2009, the California Council for Excellence, which administers the California Award for Performance Excellence (CAPE), recognized CSSD as a silver-level Eureka Award recipient. The award program, which emulates the Malcolm Baldrige National Quality Program, recognizes organizations that demonstrate superior performance in seven key business areas that include leadership, strategic planning, customer and market focus, measurement and knowledge management, human resources, process management, and business results. The rigorous Baldrige Criteria are recognized internationally as the hallmark for performance excellence and are used to select award winners to serve as role models for all California organizations.

In the 2003-2004 school year, the Charter School of San Diego was first charter school accepted by the San Diego and Imperial County Fringe Benefits Consortium and Joint Powers Authorities that was not sponsored by a JPA member school district.  San Diego Unified School District does not belong with this agency. Now, other charter schools are able to benefit from the ground breaking policies developed.

In 2001, the President and Chief Executive Officer of The Charter School of San Diego in collaboration with the Greater San Diego Chamber of Commerce Business Roundtable for Education, a representative of the office of the Superintendent of Schools of San Diego Unified and a handful of other charter leaders from San Diego created the first fully developed Charter School Policy. This policy was approved by the San Diego City School Board of Education. The policy proved to be a model replicated nationally by other charter school granting agencies.

In January 1993, legislation allowing charter schools in California became effective and the transition of the Educational Clinic Alternatives to the Charter School of San Diego – Student Success Programs was sent before the SDUSD Board of Education and approved. On July 1, 1994, the charter was formalized. In its first year as a charter school, the Western Association of Schools and Colleges (WASC) was so impressed that they awarded CSSD the maximum five-year accreditation.

In 1998, The Charter School of San Diego began the purchase of a two million dollar teacher owned risk policy designed to protect classroom professionals. In May of the same year, the SDUSD Board of Education unanimously renewed the school’s charter for another five years—the first charter to be renewed in San Diego County.